Like always, it’s been a while since the last update, which doesn’t mean that I have been quiet. I’m always doing or thinking of a new project, when I’m not, I remind myself how good I feel when I do have one or I’m making one. It doesn’t matter how much time I’ve got, as long as I choose the right project for the amount of time I’d like to spend on doing it (without getting frustrated or too anxious, just the right balance).

This time was a request from a friend who was heavily pregnant and wanted a toy for her baby: an amigurumi octopus!

It was quite easy and I liked the way it came out. The biggest challenge was to make the eyes and the little star in the head (also a mouth that didn’t turn out good so I gave up). I still have a long way to go practicing eyes, little ‘accesories’ and mouths when the crochet pattern is quite ‘open’. In any case, I liked the idea, loved that she actually requested it, and her now 5 months old baby likes it! 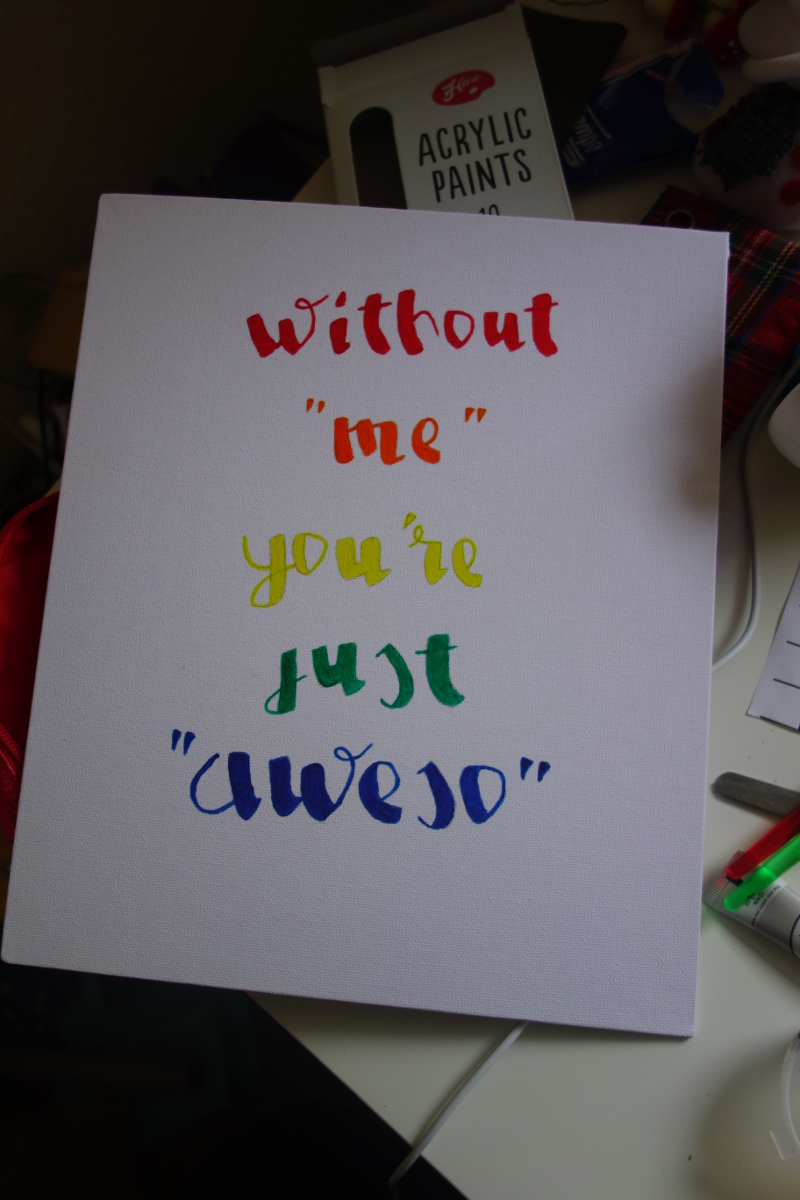 When I saw this quote a particular friend came to my mind. What a perfect opportunity to give it to him as a gift! He has a “personal quote” rather similar so I liked the idea but I could have chosen his quote as well (actually I thought of this afterwards, hehe).

A couple of months ago a new Poundworld opened nearby and when on an exploring mission, I was surprised by the wide range of objects at such a low price! (sometimes below or over a pound). I got a nice thin canvas and 12 acrylic paints for only £2!

At the beginning I wanted to try with proper calligraphy, but then I realised not only my calligraphy skills were so good, nor my ability of using a brush and acrylic paint, so I decided to draw it and then paint it. If I have had more time, I would have mixed the colours and have a nice gradient transition. There will always be another chance to try 😉 I have realised after a long time that I haven’t uploaded the pictures of these lovely frames I did last year! I think they are definitely one of my favourites crafts from the last years. They are really easy and fast to knit and they look gorgeous! You can actually make any pattern that you fancy and it will always be a unique present with a vintage touch 😉

This is a quick and easy present, a “pensiero” as they call it in Italian which means “a thought”. I love that expression because that’s exactly what it is, a little reminder that I’ve been thinking about someone. As I could not find anything circular that I could use and had no time to buy anything, I took the always useful polymorph plastic (has different names) that gets malleable with hot water. Then I took a package of lace that you can find in Pounland or anything similar. I chose a medium width and the right length to wrap the circle and secure it with super glue. As it was cotton lace it stayed there. the last bit is the easiest part, you just have to fold half of the lace that you’ve got (I previously cut it in different lengths) and then pass it through the ring making a knot when you fasten it. They more you pull, the flatter the knot is. Finally I added some butterflies (also found in pounland) just to give an extra detail. The original idea was to do a dream catcher but I didn’t have the appropriate thread, so that was the plan b.

As i had some extra lace when I wrapped the circle I decided to sew it to make it easier to hang, but it is not particularly necessary.

Nothing worse that a whim without all the ingredients. Luckily, internet is always here to save us. I have tried the Minimalist Baker’s recipe, because I didn’t have eggs, and it turned out to be great and really easy to make! Second attempt to make baby shoes. I keep on changing stitches and re thinking the best way of making them. Still not completely convinced and unable to make them look the same, but I’m getting there ^^ After checking several designs and not being convinced by any of them, I decided to do a very simple one; I knitted 3 “branches” of simple crochet, and then made a braid. I sewed the clip and left a loop on the other side to attach the pacifier.

It is not a particular nor an amazing thing, but it is easy to make and to give as a present to let someone know that you have them in mind 🙂